'The Flash' and 'Supergirl' To Do Musical Crossover Episode 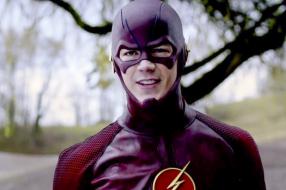 Now that 'Supergirl' is officially on The CW, the network is planning a special musical crossover episode.

The CW revealed the news at its Television Critics Association panel on Thursday and said the crossover episode will be a perfect fit for series stars Grant Gustin and Melissa Benoist, both of whom were on 'Glee' before putting on their costumes.

"Yes, there will be a musical crossover," said executive producer Greg Berlanti. "There's going to be a musical pair of episodes in the back half of the year between Supergirl and Flash. We have a number of people who can sing from all shows making appearances."

"I think they're going to be mostly pre-existing songs. We have been talking about trying to write at least one original song per episode."

"We've toyed with who potentially the villain could be," he added. "My sense is we'll be very careful about how it is they'll break into song. There'll probably be an element of being inside a character's head sometimes."

"It's many episodes away but we are going to start combing through the music and talking about the possibilities."