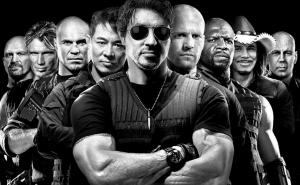 Although its August 2014 release is still a ways away, the first trailer for 'The Expendables 3' has dropped.

The teaser features the bad boys whistling as they walk up to a plane in a hangar and turn around to reveal the cast.

Bruce Willis was replaced by Harrison Ford after a publicized salary dispute in which he demanded to be paid $1 million a day.