'The Amazing Race' Host Talks About Possibility Of Celebrity Edition 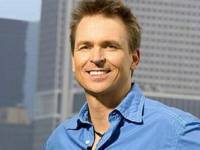 'The Amazing Race' host Phil Keoghan says while he would like to eventually do the celebrity edition of the show that fans are always asking about, the logistics of the race make it difficult to accomplish.

"I would love to have a celebrity version," Keoghan tells EW. "If every celebrity who has told me they liked the show signed up and was a part of it, that would be huge."

"The question that always comes up is would we be able to get them out of their schedule," he explains.

"They say they want to do it, but the reality is would their schedule allow for it, and would they really be able to put up with the schedule itself. It's very different than anything else that's shot, like a movie set."

"We sort of have to adhere to the rules of the world as opposed to creating our own rules on a set or in a studio. We are beholden to what happens in the real world. That makes it really tough."

The seventeenth season of 'The Amazing Race' will get started on September 26.