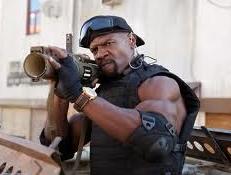 In his lawsuit filed against the agency and one of its top executives, Crews says WME "knowingly permitted and encouraged to engage in sexually predatory conduct."

Crews says he was subject to sexual assault, sexual harassment, gender violence and emotional distress during and after a Feb. 2016 incident in which he says he was repeatedly groped by agent Adam Venit.

The 'Brooklyn 99' actor and former NFL player reveals he aimed to have Venit disciplined after the incident by complaining to the agency's chairman Ari Emanuel. However, instead the two men retaliated against him by trying to hurt his career.

"Crews had no choice by to bring this action to protect himself and to stand up for all victims of sexual predators," the suit says. "Through this case, Crews seeks to send a message to all abusers and sexual predators, that, no matter how powerful you are, you can be held accountable for your reprehensible misconduct and so will the companies that cover up your disgusting misdeeds."

Crews deduces that the agency knew Venit was predatory and endorsed such behaviour when it failed to punish him.

"Indeed, a message needs to be sent to those in power who abuse those over whom they can exert influence and control that abuse and sexual predatory behavior will not be tolerated."