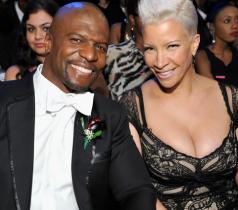 Terry Crews is tells fans about his addiction to pornography, which he says "really, really messed up my life."

In a series of videos posted on social media, the 'Brooklyn Nine-Nine' actor and the former NFL player says he had to go to rehab for his addiction, which threatened his marriage.

"Some people say, 'Hey, man ... you can't really be addicted to pornography.' But I'm gonna tell you something: If day turns into night and you are still watching, you probably have got a problem. And that was me," he says.

"It changes the way you think about people. People become objects. People become body parts; they become things to be used rather than people to be loved."

Crews and his wife, singer Rebecca King Crews, have been married since 1990 and have five children.

"It affected everything. My wife was literally like, 'I don't know you anymore. I'm out of here.' I had to change. I literally had to go to rehab for it."

Crews, who went through the issue six years ago, now advises: "Women, you need to be fearless. You need to confront your man about this problem. You cannot accept any pornography in your life."

"Every time I watched it, I was walled off. It was like another brick that came between me and my wife. And the truth is, everything you need for intimacy is in your partner."