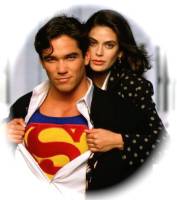 Teri Hatcher, who played Lois Lane on 'The New Adventures of Lois and Clark', will be making an appearance on the final season of 'Smallville'.

The 'Desperate Housewives' actress has been cast as Ella Lane, mother to intrepid reporter and present-day Lois Lane, played by Erica Durance (photos

She will appear in the season's eighth episode titled 'Abandoned' as Lois discovers some old family videotapes that contain footage of her mom.

Hatcher's willingness to take on the cameo definitely shows her appreciation for the role that ended up being her big break on television.

'Smallville's tenth season premieres this Friday, on September 26, 2010, on the CW.