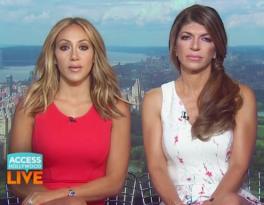 Teresa Giudice stormed off a live TV interview on Thursday after being asked to discuss her husband's possible deportation.

When 'Access Hollywood Live' co-host Dave Karger asked the 'Real Housewives of New Jersey' star about the possibility of Joe being deported back to Italy at the end of his 41-month prison sentence, she immediately tried to avoid the question.

"Do you worry that it's the end of your family unit as you know it because there is all this talk that Joe could be deported since he's an Italian citizen. Do you think about that?," asked Karger.

"Next question please," she said. "I don't think that's something you should be asking."

"Well everybody's talking about it, and it could be a reality," defended Karger.

"Okay, well it is a fact and we're probably going to see it on the show so I don't think that was a rude question," interjected co-host Kit Hoover.

"No, you're not gonna see it on the show and as a matter of fact, I'm going to leave," Giudice said before she walked off.

Her publicist said the 'Real Housewives' star was justified in leaving.

"Teresa was there to promote the new season of Real Housewives of New Jersey and the paperback release of her book, not to be asked a question like the one that was posed about this being the end of her family. She politely deflected the question and asked them to move on and they didn't, so she left."

"She was doing Access Hollywood, not 60 Minutes or a sit down with Barbara Walters. To see the host hi-fiving at the end of the segment as if she did something worthy of a celebration was absolutely taste less."

"Clearly the question posed and the answer they hoped to illicit were not something Teresa was comfortable discussing," adds the rep. "She has her own personal reasons for that and owes absolutely no one an explanation for her choosing to not answer the question."