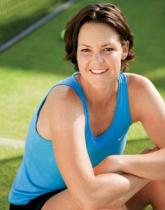 Tennis star Lindsay Davenport has given birth to her third daughter.

And it was no small task as the baby weighed in at over ten pounds for the 35-year-old married to Jonathan Leach.

"We are so excited to say our third child arrived this morning," the former World No. 1 said on Twitter."

"We don't have a name yet. Hopefully by tomorrow," she said. "Getting desperate with choosing a name we both like."

Although she was still missing watching tennis on television.

"So bummed hospital doesn't have Tennis Channel or ESPN2," she said. "No Australian Open for us next few days."