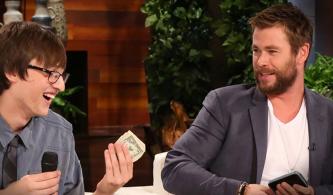 Ellen DeGeneres has rewarded a Boy Scout who returned Chris Hemsworth's lost wallet with a $10,000 check.

The Australian actor said he didn't think he would see his wallet again after losing it in a "rough" part of Los Angeles while dining with his family.

However, when the 17-year-old found Hemsworth's wallet still full of personal cards and cash, he contacted the actor's publicist and mailed it back.

"When I found out it was yours, I looked up at my mom and said 'Mom! Do you know who this is? We found Thor's wallet!'" he told Hemsworth, earning a laugh from 'Ellen's audience.

Hemsworth thanked the teen and gave him all the cash from the wallet. He also wrote a letter of recommendation for Tristin Budzyn-Baker to help him earn the rank of Eagle Scout.

"I expected it was going to be empty, but all the cash was in there so I want to give the cash as a gift," said the dad of three.

But Ellen DeGeneres went one better and rewarded him with $10,000 for his good deed, to help him go to college after finding out he had sold some of his horses to pay for his tuition.