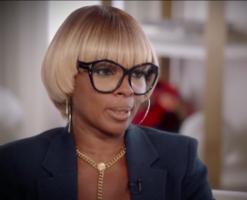 Apple Music promises the interview as "an intimate conversation" featuring Blige "like you've never seen her." However, after its teasers, 'The 411 with Mary J. Blige' may have an uphill battle ahead of September 30 debut.

One of the clips features the singer crooning Bruce Springsteen's 'American Skin' in front of an awkwardly silent Clinton before clasping hands with the nominee.

In the second clip, Blige tells Clinton that "a lot of people in my community think Obama was blocked in congress because he was black" and asks her "How are you going to do what he wasn't able to do?"