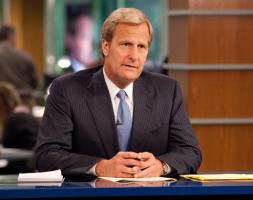 HBO has released a trailer teasing 'The Newsroom's final episodes.

The final season of the Aaron Sorkin drama, which will consist of only six episodes, will air in November.

The teaser doesn't feature any clips from the season but instead a photocopier in action with the camera focused on parts of pages of the scripts.

The lines hint at Jeff Daniel's Will considering quitting from The Newsroom.