Teaser Trailer For Christopher Nolan's 'Interstellar' Reaches For The Stars 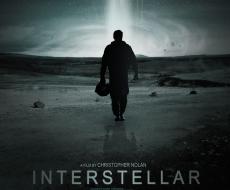 The first trailer for Christopher Nolan's 'Interstellar' doesn't reveal much about the movie but it does exactly what a teaser should and sets up the exploration of the universe.

"We've always defined ourselves by the ability to overcome the impossible," Matthew McConaughey says to clips of mankind's achievements and space missions. "And we count these moments, these moments when we dared to aim higher, to break barriers, to reach for the stars, to make the unknown, known."

"We count these moments as our proudest achievements, but we lost all that. And perhaps we've just forgotten that we're still pioneers. That we've barely begun. And that our greatest accomplishments cannot be behind us. Cause our destiny lies above us."

), Casey Affleck and Michael Caine, will portray a future in which world economies have collapsed and a mysterious rip in time is opened to offer hope for mankind.