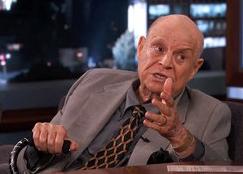 Jimmy Kimmel paid tribute to the great Don Rickles last night. The legendary comedian passed away at the age of 90 on Thursday.

A teary-eyed Kimmel reminisces about their friendship including dinners together and reads some personal letters that Rickles wrote to him.

"We lost someone that we and I love very much today. Don Rickles passed away this morning," he said. "He was 90 years old. And I know it sounds crazy to say that he was too young – but he was because he was youthful — he was so funny and sharp and generous and I was fortunate enough to — not only have Don on this show as my guest – but also to become close to him and his wife Barbara – which was a lot of fun for me."

"I grew up in Las Vegas – so Don Rickles – even when I was a kid – was a very big deal. His name was on the marquee at the Sahara. Then you'd see him with Johnny Carson. Making fun of Johnny – making fun of Frank Sinatra."

"Sitting behind a desk while Don Rickles made fun of me. It was like being a real talk show host for a minute," he said. "He was a funny guy, I know that's not a news flash."

"I was lucky to know him... There will never be another Don Rickles. He was probably the greatest talk show guest of all time. We put together this video – to pay tribute – and here he is, the one, the only – Mr Warmth. Don Rickles."