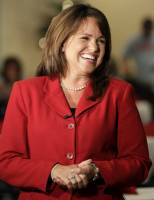 Tea Party favorite Christine O'Donnell says she's been invited to be a contestant on 'Dancing with the Stars'.

"I just got the Official Ask from Dancing With The Stars," O'Donnell reveals on her Facebook page.

But O'Donnell, who lost to a Democrat amid controversy over past statements about dabbling in witchcraft, says she isn't sure she should accept.

"Although I am utterly flattered, my initial thought was to decline, as my 2-year-old nephew has more rhythm than me, and my two left feet," she jokes.

"Still undecided," she says because she has a book about politics to complete. "Book comes first."

ABC will announce the new cast on Monday.