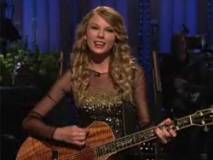 ) hosted what proved to be the season's best 'Saturday Night Live' this weekend.

The 19-year-old singer began the night by sweetly taking shots at Kanye West, ex-Joe Jonas and even blowing a kiss to rumored boyfriend Taylor Lautner during her 'Monologue Song' as she all but confirmed their relationship.

"You might be expecting me to say something bad about Kanye," sang Swift. "But there's nothing more to say because everything's okay. I've got security lining the stage."

She then moved on to a spoof of 'Twilight' that revolved around a Frankenstein-monster family and featured Swift doing a spot-on mopey Bella.

Check out some of the best skits from the Taylor Swift's SNL appearance below.