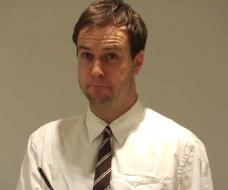 Taran Killam is defending the somewhat controversial ISIS sketch from this past weekend's 'Saturday Night Live'.

The sketch, starring Killam and guest host Dakota Johnson, was a spoof on Toyota Camry's 'My Bold Dad' ad with a surprise ending.

Johnson played an American girl leaving home for, it would appear, college. They have an emotional goodbye.

But at the end of the ad, it's revealed that the naive American isn't leaving for college but to join ISIS.

Some viewers predictably said the sketch was in poor taste but Killiam says he's proud of it.

"Proud of this," he says on Twitter. "Freedom to mock is our greatest weapon. Thanks to the writers who asked not to be mentioned by name."

The comedian also earned some support from Whoopi Goldberg on Monday's 'The View'.

"I've always felt that the best way to get back at boneheads like ISIS is to make them the joke," Goldberg said.