Tara Reid Calls Off Her Wedding To Michael Axtmann 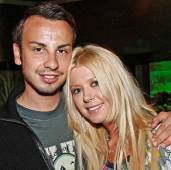 ) says her wedding planned for next month is off.

The 34-year-old actress gave no explanation for the change of heart and only released this brief statement: "Tara Reid has confirmed that she will not be moving forward with her May 22 nuptials."

The couple were dining at the Little Door in Los Angeles when "Michael surprised Tara with a beautiful round brilliant cut ring," according to her rep.

"Obviously I said yes," Reid said at the time. "I was very surprised."