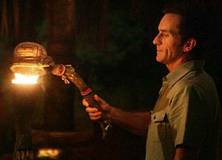 Earlier in the week, Jeff Probst teased us that Wednesday night's 'Survivor' episode would feature "one of the greatest tribals yet." And it definitely delivered.

"It's one of the greatest showdowns we've ever had and one of the most interesting stories of the season. Russell and Boston Rob. Two heavyweights duking it out on the beaches of Samoa," says Probst.

"But the short, stubby, tooth-missin’ garden gnome did it again! Unbelievable. I still cannot believe he pulled it off."

"There were two huge elements at play: 1. It was a very inspired move to try to convince Tyson that he was safe at the vote because Russell was turning on Parvati, therefore Tyson didn’t need to worry about voting for Russell. 2. Russell giving the idol to Parvati was the biggest risk he's taken in either of his two seasons. He went for broke and it worked."

"The thing is Tyson didn't have to change his vote. He could have gotten the same result and still kept himself safe by voting for Russell. The smarter move would have been to say, 'Fine Russell, I dig that you’re ready to vote out Parvati. I'm gonna keep with my plan to vote for you just so I don’t alert anybody but I’m with you, and Parvati is going home."

"Tyson could have gotten the same result without risking anything. Tyson simply lost his mind and forgot what he was doing… because Russell put that damn Russell seed in his head."

"Russell just made a major game-changing, momentum-switching move and it worked. That's what legends are made from -- big bold moves."

"Tonight, Russell took the upper hand. I loved how happy he was with himself, on the beach slapping his thighs with joy. And Rob's face of confusion as he heard the votes being read was something we’re not used to seeing."

As for Russell's threat that he was going to make Rob "eat his words" that it's better to play with him than against him, Jeff says: "Last night, I think Rob was served an appetizer."

"These are our best players and they are giving us a tremendous season. The strategy is as intense as it has ever been — and we’re still just getting started."

See Tyson explain more behind his thinking on voting for Parvati last night: