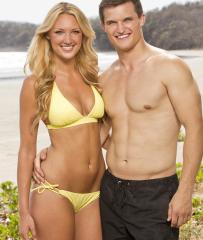 The couple, who were dating on the Blood vs. Water edition of the reality series, tied in the knot at the Shrine Chapel in Detroit on Sunday.

Former Miss Michigan Jaclyn opted for a long lace sleeves dress that was a mixture of lace and silk fitted with a train and Jon went with a black tux with black bow tie.

Several cast members from the season were at the wedding including winner Natalie Anderson.

Jon had finished in sixth place in the season while Jaclyn was runner-up.