'Survivor's John Rocker: I Wasn't Going To Be Cussed Out By A Woman 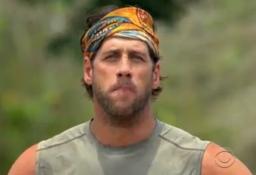 Former MLB pitcher John Rocker's past comments came back to haunt him as he was sent packing on 'Survivor: San Juan del Sur' this week.

Rocker was voted out by his tribe in a blindside after the opposing tribe's Natalie Anderson went off on the Braves pitcher for being a "racist" and a "homophobe" based on an article that was published nearly 15 years ago.

In the Sports Illustrated interview, Rocker said he would never play for a New York team because "imagine having to take the 7 Train to the ballpark looking like you're riding through Beirut next to some kid with purple hair, next to some queer with AIDS, right next to some dude who just got out of jail for the fourth time."

"The biggest thing I don't like about New York are the foreigners," he said. "You can walk an entire block in Times Square and not hear anybody speaking English. Asians and Koreans and Vietnamese and Indians and Russians and Spanish people and everything up there. How the hell did they get in this country?"

His tribemates told him to take it on the chin and not respond to Natalie but Rocker says he couldn't just sit back and take it.

But Rocker says he's not what people may think.

"Until you get to know me, that's just what you're going to think. You're going to just assume I'm an assh--e, assume I'm a bigot. But over the years, not one single person that actually knows me had come forward and agreed with any of those statements about me. Not a single one. In fact, it's been exactly the opposite. People that know me defend me."

And he's now actually friends with the twin sisters from this edition of 'Blood vs. Water'.

"We're friends now," he says. "I got to spend a lot of time with Nadiya at Ponderosa and became good friends with her, and then of course they get back to Jersey and she tells Natalie, 'He's actually a good dude. We're actually pretty good friends. You'd really like him.'"

"Playing 13 years of professional baseball, I've heard a lot of s---. I've said some really bogus stuff in my life too. Nadiya, she can keep up with me word for word. Several times, she'd come out with something that would even make me blush."