'Supernatural' To Do an Animated 'Scooby-Doo' Episode Next Season 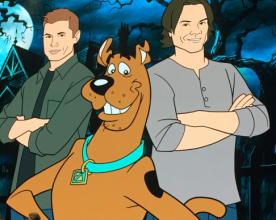 'Supernatural' is planning an animated 'Scooby-Doo' episode next season.

CW made the announcement during its upfront presentation Thursday.

The reveal got a curious reaction since many in the audience didn't know whether it was real or merely a joke.

The network didn't specify whether the animated Scooby-Doo crossover episode would see other characters from the cartoon or only include Sam and Dean meeting the great dane.

'Supernatural' aired its season finale on Thursday nigh,. The drama has never been afraid to give viewers a new twist from the wacky episodes to the most serious and it appears that will continue as it goes into its thirteenth season next fall.