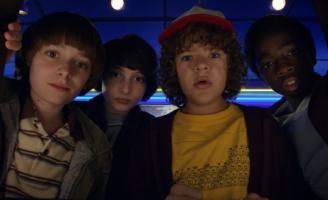 The first trailer for 'Stranger Things 2' debuted at Comic-Con.

It’s 1984 and the citizens of Hawkins, Indiana are still reeling from the horrors of the demogorgon and the secrets of Hawkins Lab in the trailer.

Will Byers has been rescued from the Upside Down but a bigger, sinister entity still threatens those who survived.

Some of the new characters include Sean Astin as Bob, Winona Ryder Joyce's old high school classmate and new boyfriend, Dacre Montgomery and Sadie Sink as a brother and sister duo and Paul Reiser as Dr. Owens.