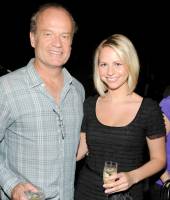 Kelsey Grammer is engaged to his 29-year-old girlfriend, Kayte Walsh.

"Yes, they're engaged," the 55-year-old's publicist confirms. "They're very happy and very much in love. They never announced it because he wanted to be discreet and enjoy the good news privately."

The former 'Frasier' star, who is in the middle of a divorce from his third wife, began seeing Walsh when he was still married to Camille.

A month after his Camille filed for divorce in July after 13 years of marriage, Grammer and the British flight attendant revealed that they were expecting their first child together.

Grammer has an 8-year-old daughter and 6-year-old son with Camille, plus two daughters from previous relationships.