Steven Tyler Upsets Some With Rendition Of National Anthem 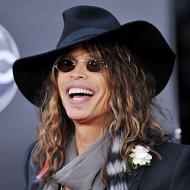 Many viewers are slamming the Aerosmith frontman for flubbing words and going off tune in his performance.

To us actually, it sounds just what you would expect Steven Tyler to sound like singing the anthem. Which probably wasn't a great idea to begin with.

Tyler, who was rooting for the New England Patriots if you didn't guess by the scarf, joined the team as they celebrated their win over the Baltimore Ravens following the game.