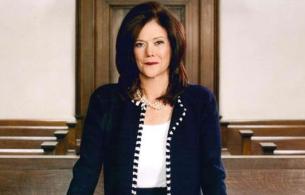 In an interview with Newsweek, Zellner promises to go hard on the cops she says framed Avery and provides hints of some of the evidence she may introduce when she files in the next couple of months.

"What drives me is the abuse of power—the bullying and the victim. I have such a strong reaction when I see people who can't defend themselves," she says.

Avery, who spent 18 years in prison for a wrongful conviction, has maintained his innocence. He had a $36 million lawsuit against Manitowoc County when he was arrested and convicted for the 2005 murder of Teresa Halbach, a freelance photographer who went missing after driving to the family's auto salvage yard.

Viewers have been outraged at the evidence that was used against him, which his lawyers argued was planted, and the apparent coerced confession from nephew Brendan Dassey, which played a key role in turning public opinion against him at the time.

"When I watched the Avery case, I felt that the attitude toward him by the prosecutors and the state was that he was disposable. It was almost like a class thing. They didn't matter, they had no power," Zellner says. "The longer I watched it, the more angry I got."

Zellner says the biggest piece of evidence she's uncovered is the cellphone records that show Halbach left Avery's property. The state claimed Avery shot Halbach in his garage and then burned her body at the salvage yard.

"So it's absolutely shocking to see cellphone records that were part of the discovery that were turned over to the defense... document her route leaving the property. She goes back the same way she came, she's 12 miles from the property on the last ping," Zellner says. "They screwed it up."

Zellner adds that the defense team also apparently didn't recognize that Daylight Savings Time ended on October 30, 2005 which meant that their timeline for the two independent witnesses who saw Halbach leave the Avery property was off by an hour.

Zellner says there was no investigation done by police in several areas including mysterious phone calls Teresa had been receiving.

"You don’t just get information like that and file it," she says. "What investigation was done? None. There was no effort to trace those calls."

They also only did 12 DNA tests. She compares it with her case of Ryan Ferguson, a Missouri man who did 10 years in prison after his wrongful conviction for killing a newspaper editor, in which police did 40 DNA tests.

"Everybody they interviewed had to give their DNA. Everyone," Zellner says. "I've never seen this before in a case where they kept it so close to Avery, just his family."

Asked whether she has a list of suspects, Zellner says: "We have a couple. I'd say there's one, leading the pack by a lot. But I don't want to scare him off, I don't want him to run."

"If you think of the concept of using your opponent’s strength against them, it's kind of similar to a lot of the stuff I've done," she explains. "They used forensic science to convict him, and I'll be using it to convict them of planting the evidence."

In a letter from prison, Steven Avery says he believes Zellner will get him out.

"I first saw Ms. Zellner on TV in another case. I told Sandy, my friend, to watch it. Sandy said, 'She will be the one to get you out.' So I started writing. Since she has taken my case on January 8th she has figured out more than all of my other attorneys together. I totally trust that she is going to get me out," he writes.