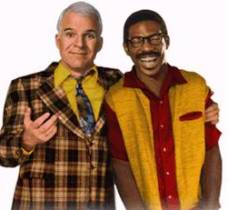 With Eddie Murphy now officially chosen to host the 84th Annual Academy Awards, Oscar emcee veteran Steve Martin is offering the actor some hosting tips as he prepares for the big night.

"I heard you're hosting this year's Oscars," Martin begins in an open letter on his website. "First of all, Congrats. Even though you didn't ask for my advice and specifically said, 'please, no advice', here are a few tips!"

"Whatever you do, don't have a co-host," he quips. "They're a big pain and they just end up breaking your SNL hosting record."

"People always say it's a disgrace that neither you nor I have ever won an Oscar, but they're just being correct," he says. "The losers can feel very sad, so when you're backstage with them, pat their backs, then shake your head sadly. It's a blast!"

"Fortunately, only you and I can get away with smuggling out an Oscar in our pants."

"Remember to relax and have a good time while 12,000 livebloggers rip you to shreds."

"The accountants that certify the voting? Same chad counters from Florida."

"Eddie, since you and I are old friends, and I sincerely thought you deserved an Oscar nomination for Bowfinger, the movie we did together that stands alone in comedy history, from which we got no credit or acknowledgement except large paychecks and drivers and any type of food we wanted delivered to us every day in our really nice trailers, I wish you all the best on your Oscar hosting gig."