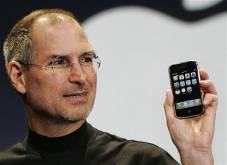 Even though Barbara Walters' list of fascinating people included names like the Kardashians and Donald Trump, 'The View' co-host came through with her choice of Steve Jobs as most fascinating person of 2011.

It was an unusual choice given the program had never featured a person who wasn't alive, but Walters said since the Apple co-founder was selected much earlier in the year, they decided he was deserving of the title even after he passed away in October.

Walters said she kept him on the list because, much like Jobs believed, "rules were made to be broken."

Jobs died at 56, after an eight-year battle with cancer.

"He wanted things insanely great and would take or accept nothing less than that," Disney president and CEO Bob Iger told Walters.

"His enthusiasm was unbelievably evident, visceral. You could see it from his toes to his head, he was so enthusiastic."

"He also was inspirational in that he demanded excellence from his people. He demanded that they think big. Big ideas really got Steve moving."

"There were really only two things in Steve's life. There was Apple and there was his family, and he zealously protected both of those."