Steve Irwin's Widow Hasn't Been On A Date Since His Death 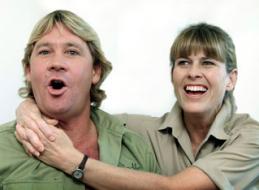 Terri Irwin, the wife of the late Steve Irwin, says she hasn't been on a date since 'The Crocodile Hunter' star's death in 2006.

"I think it's wonderful when people who have lost someone find love again, but I'm not personally looking, and I haven't been on a date in 27 years," the 53-year-old tells People magazine.

Irwin died almost 12 years ago when he was struck in the heart by a stingray barb.

Terri is one of the leaders at the Australia Zoo.

"I'm content. I have two beautiful kids, a really full plate. I've already had my happily ever after," she says.

The couple's son, Robert, is turning into a star in his own right with his regular appearances on 'The Tonight Show'.