Steve Harvey's Ex-Wife Bashes Him In Series Of Videos 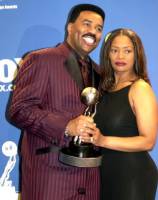 Steve Harvey's ex-wife has posted a series in which she alleges that he cheated on her throughout their 10-year marriage and then turned her family against her when they split.

Mary says she's speaking up because she's behind sued by her ex and her name keeps coming up in Harvey's interviews.

"In Steve's opinion, I was responsible when Oprah did not give him a TV show," she says. "I'm being sued for that. That is why I'm saying what I have to say…. To keep seeing my name referenced when talking about his life – that part of it, I don't understand."

She claims he was unfaithful practically from the beginning and was ruthless during the divorce.

"He turned my son against me, had me evicted from our house," she says. "I woke up, and everything was gone."

The couple divorced in 2005. Two years later, Steve Harvey married Marjorie Bridges, who Mary says had been his mistress.

"With all the emails and the text messages, the different things that I was finding out about," she says, showing a page purported to be an email exchange between the two.

"I thought the least he could do was make me whole at the end of it. He just left, walked out the door. Once he realized I was going to divorce him he went to our apartment in New York, and then she joined him there."

"Steve never said that he was sorry," she continues. "He had our housekeeper pack his belongings up and forward those belongings to New York."

In a November 2009 interview, Harvey called Marjorie "the best thing that ever happened to me in my entire life."

"We are appalled and aware of the videos and other fabricated documents which contained false, misleading, derogatory, disparaging, malicious, explicit and slanderous information about Mr. Harvey, his current wife and others."

"The ex-wife is fully aware of the court's current orders and permanent injunctions which prohibit either party, their lawyers or representatives from discussing and releasing information on the Internet and to the media. We are taking the necessary legal steps to rectify this matter to the full extent of the law and we will be seeking contempt and sanctions against her for such reprehensible and callous disregard for the court orders."

"We are saddened that the ex-wife has resorted to such devious and selfish behavior, with a reckless disregard for their minor son, her adult son and Mr. Harvey's other children."