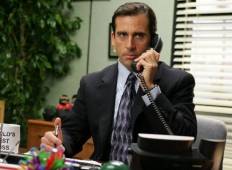 Executive producer of 'The Office', Greg Daniels, has confirmed that Steve Carell won't return for the show's final season or the series finale.

Speaking with reporters at a Television Critics Association panel, Daniels said Carell "was very much of the opinion that the 'Goodbye Michael' episode and the story arc that we did leading up to it was his goodbye to the fans and the show."

"He believes the final season is the goodbye that the rest of the show gets to have, so at the moment we don't have any plans for him to come back."

Carell left the series after seven seasons in 2011. But Daniels says other cast members, including Mindy Kaling -- who left for her own Fox series -- could return.

"There's still a lot of good things that we have planned for the rest of the goodbyes," he said.

Dropping a couple of hints, Daniels teased next week's episode is "the beginning of the end" and the Valentine's Day episode will see "someone fired."

Daniels said he liked the fact that producers are able to plan the end of 'The Office' instead of being canceled because it gives fans a chance to see the loose ends of the story tied up.

The two-part Office finale will air in May.