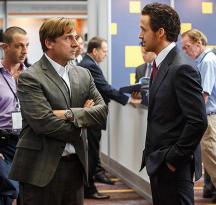 'Anchorman' and 'Step Brothers' director Adam McKay turns to the slightly more serious world of banking in the film which features four outsiders taking on the big banks.

Based on a true story and best-selling book, the four men star as men who aim to profit from the impending collapse of the economy. Their investment leads them into the dark underbelly of modern banking where they must question everyone and everything.

The scheduled release date of December 23 may leave it out in the cold against the big competition. We're not sure how many families will watch a movie about the corrupt banking system during the most festive time of the year.