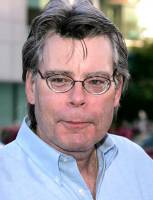 Julie Eugley, an assistant to King, tells the Maine-based 'Bangor Daily News' that the horror novelist and his wife made the donation so the soldiers of Bravo Company of the 3rd Battalion, 172nd Infantry Unit could spend the holidays with their families.

But it wasn't as simple as cutting out a check for $13,000, Eugley tells the paper that King was careful to steer clear of the number 13 to avoid any bad luck befalling him or the Maine troops.

"Steve is such a numbers person," explains Eugley. "When we were approached for $13,000, he thought that number was a little unlucky."

"He didn't want any bad whammies associated with these troops."

The soldiers are due to head out to Afghanistan in January.