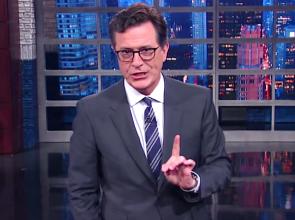 Stephen Colbert says despite calls from some Donald Trump supporters for him to be fired, he doesn't regret his crude joke in Monday's monologue devoted entirely to the President.

In the monologue, Colbert went after Trump for calling the long-running program 'Deface the Nation' and dismissively ending his interview with CBS' John Dickerson.

"John Dickerson has way too much dignity to trade insults with the president of the United States to his face," Colbert said, "I, sir, am no John Dickerson."

He then went on to rattle several pointed shots at the President: "You're not the POTUS. You're the BLOATUS. You're the glutton with the button. You're a regular Gorge Washington. You're the presi-dunce, but you're turning into a real prick-tator. Sir, you attract more skinheads than free Rogaine. You have more people marching against you than cancer."

"You talk like a sign language gorilla who got hit in the head. In fact, the only thing your mouth is good for is being Vladimir Putin's c*ck holster," he continued. "Your presidential library is going to be a kids' menu and a couple of Juggs magazines. The only thing smaller than your hands is your tax returns, and you can take that any way you want."

Colbert addressed the backlash right at the top of his show on Wednesday night and said it was anything but 'homophobic'.

"Now, if you saw my monologue Monday, you know that I was a little upset at Donald Trump for insulting a friend of mine," Trump told his audience. "So at the end of that monologue I had a few choice insults for the president in return. I don't regret that."

"He, I believe, can take care of himself. I have jokes; he has the launch codes! So it's a fair fight."

"So while I would do it again, I would change a few words that were cruder than they needed to be," he conceded. "I'm not going to repeat the phrase, but I just want to say for the record, life is short, and anyone who expresses their love for another person, in their own way, is to me, an American hero. I think we can all agree on that. I hope even the president and I can agree on that. Nothing else. But, that."

Jim Parsons, who was Colbert's guest on 'The Late Show', told the host he wasn't offended in the least either.

"I thought that was a very strange tag to put on the whole monologue," he weighed in. "I thought, 'That's not homophobic!' You taught me new terms. As a gay man, I didn't know certain things… it was titillating, not homophobic."