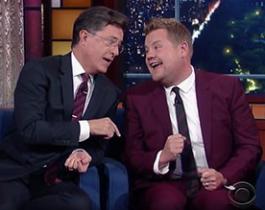 "Stephen is the ultimate master of ceremonies with award-winning creative talents, and as we've seen the past few months, he has a fearless passion for live television," CBS says in a statement. "We look forward to honoring television's best while entertaining audiences with the creative energy and sharp comedy of Stephen Colbert."

"This will be the largest audience to witness an Emmys, period. Both in person and around the globe," Colbert quipped, obviously referencing White House press secretary Sean Spicer's first press conference during which he proclaimed it was the most watched inauguration in history.

Colbert's choice as host of the awards show should come as no surprise. It continues with the recent trend of late night hosts anchoring their network's airing of the awards show such as Jimmy Fallon hosting NBC's Golden Globes, Jimmy Kimmel hosting this year's Oscars on ABC or James Corden holding down the Grammys on CBS.

Nominations will be announced July 13 while the awards show will air live from Microsoft Theater in Los Angeles on Sunday, September 17.