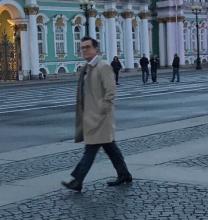 Stephen Colbert has arrived in Russia for special episodes of 'The Late Show'.

Colbert made the surprise revelation in response to President Trump's admission that he doesn't have any secret tapes of conversations with former FBI director James Comey.

"Don't worry, Mr. President. I'm in Russia," responded Colbert with a photo of himself walking the streets in Russia. " If the 'tapes' exist, I'll bring you back a copy!"

Colbert's reference to 'tapes' obviously referred to the infamous alleged "pee tape" referenced in the dossier that claims Trump is involved in collusion with Vladimir Putin and the Russian government.

'The Late Show' is airing repeats Thursday and Friday while Colbert sets up in Russia. CBS has been tight-lipped and not confirmed details of what Colbert has planned.