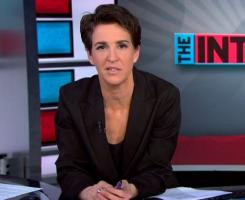 Stephen Colbert mocks Rachel Maddow for the much hyped special that turned out to be much ado about nothing after announcing she had Donald Trump's tax return.

After taking aim at Maddow during his monologue, he tried to replicate the segment with her signature blazer in front of familiar backdrop.

"I hold in my hand something very significant," Colbert said. "It is a joke, a joke that we have confirmed has been heard by Donald Trump. We believe this is the first time any joke dealing with Donald Trump has been released."

Colbert rambled on, poking fun at Maddow's nearly 20-minute-long preamble intro on Tuesday's program before revealing the tax forms, an act that made Maddow the subject of much Twitter mockery.