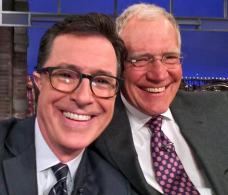 Stephen Colbert has announced more names for his first week on the 'Late Show', which begins on September 8.

), Amy Schumer will join the previously announced George Clooney -- who will be the first guest on the show.

As for whether viewers can expect to see his Comedy Central character on the talk show, Colbert said: "I don't think anyone would've watched that old show if they didn't know who I was, because that guy was a tool."

"I was able to piggyback on the back of that character and be extremely intimate with the audience because I had the excuse that I didn't mean it. But I'm here to tell you, I meant a lot of it."

"I even agreed with my character sometimes. But we tried to establish a really intimate relationship with the audience and my hope is when you see me on the new show you'll go, 'Oh, wow. A lot of that was him the whole time.' But I won't know how much of it is until I go do it, honest to God. It's an act of discovery for me too."

More names will be added to the lineup in the weeks ahead but below is the complete lineup of announced guests for 'The Late Show with Stephen Colbert' so far.