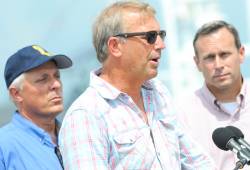 Stephen Baldwin is suing Kevin Costner over their investments in a device that BP used to try to clean up the massive Gulf oil spill.

The federal lawsuit filed Wednesday by Baldwin claims Costner and a business partner duped him out of his shares of a $52 million deal for BP to purchase oil-separating centrifuges.

Baldwin claims he was a 10 per cent partner in the invention backed by Costner, but the actor not only made it seem as if he had already sold his shares in the company, when in fact he was still heavily invested, but kept him in the dark about the BP deal.

The 44-year-old alleges he was duped into selling his shares back to the company so Costner could scoop them up and earn a bigger profit in the deal.

The lawsuit alleges that Baldwin was "damaged directly by the misrepresentations and omissions of defendants in that they sold their membership interests for a fraction of their actual value."

BP ordered 32 of the centrifuges, which separate oil from water, and deployed them in June.