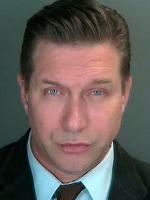 Stephen Baldwin was arrested in New York on Thursday for failing to pay state income taxes.

The 46-year-old was taken into custody and arraigned on one count of repeated failure to file New York state personal income tax returns for the years 2008, 2009, and 2010.

According to the Rockland County District Attorney's Office, he owes more than $350,000 in taxes and penalties.

"At a time when Rockland County and New York State face severe fiscal shortfalls, we cannot afford to allow wealthy residents to break the law by cheating on their taxes," says Zugibe.

"The defendant's repetitive failure to file returns and pay taxes over a period of several years contributes to the sweeping cutbacks and closures in local government and in our schools."

"My Office will continue to investigate and prosecute those who cheat our tax system for their personal gain."

If convicted of the charge, he could face up to four years in a state prison. But that didn't stop Baldwin from looking dapper in his mugshot with slicked-back hair, tie a jacket.

Stephen Baldwin will appear on the upcoming All-Star season of 'Celebrity Apprentice' next spring.