'Star Wars' Monopoly Sets Sold In US Finally Include Rey 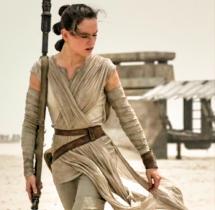 Hasbro is now selling 'Star Wars' Monopoly sets in the US that includes Rey after an 8-year-old girl asked why the female character and central figure in 'The Force Awakens' was excluded.

The toymaker claimed it had deliberately left out Rey from the game because it claimed including her in the set would have been a "spoiler" -- even though she's in almost every trailer for the film and they had no problem featuring Finn and Kylo Ren.

"Boy or girl, who cares? We are equal, all of us!," she wrote. "Without her THERE IS NO FORCE AWAKENS! It awakens in her! And without her, the bad guys would have won! Besides, boys and girls need to see that women can be as strong as men! Girls matter!"

The letter went viral and Hasbro relented to correcting the error with a new version and begin providing a Rey token to those who had already purchased the game.