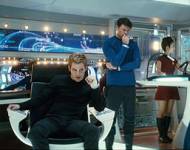 You didn't have to be on Earth to watch the latest 'Star Trek' film.

NASA beamed the movie aboard the International Space Station after Paramount Pictures agreed to let the space agency screen the movie for the ISS crew.

The movie was requested by astronaut Michael Barratt, who was a fan of the original series. Barratt credited 'Star Trek' for inspiring him to become an astronaut.

"Star Trek blended adventure, discovery, intelligence and storytelling that assumes a positive future for humanity. I was inspired by the idea of people from all nations coming together to explore space," he said. "The International Space Station is a real step in that direction, with many nations sharing in an adventure the world can be proud of."

British paper 'The Times' reports that after dinner on Friday, Barratt, along with Russian cosmonaut Gennady Padalka, and Koichi Wakata from the Japan Aerospace Exploration Agency, settled into the node of the spaceship, strapped their feet to the floor and watched a specially-adapted version of the film on a laptop.

The astronauts found time in between their many space walks as part of the repairs on the Hubble Space Telescope.

Once complete, the Hubble will sport two new science instruments, a data management computer as well as gyroscopes and batteries to sustain the pointing and power systems.