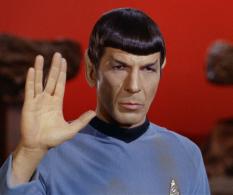 Leonard Nimoy, the man who played Spock on 'Star Trek', has died. He was 83.

Nimoy made Vulcan Spock famous on the original series from 1966 to 1969. He played the character in subsequent movies and in recent years also appeared in JJ Abrams' 'Star Trek' films and 'The Big Bang Theory'.

The character's well-known Vulcan proverb "Live long and prosper" and salute has been a pop culture staple for decades.

Nimoy's son says the actor died of end-stage of chronic obstructive pulmonary disease, a lung disease he was diagnosed with last year.

His poignant last tweet, sent on February 22, reflected on his experiences in life and read: "A life is like a garden. Perfect moments can be had, but not preserved, except in memory."

In a past interview, Nimoy spoke about playing Spock.

"In Spock, I finally found the best of both worlds: to be widely accepted in public approval and yet be able to continue to play the insulated alien through the Vulcan character."

"Of course the role changed my career— or rather, gave me one. It made me wealthy by most standards and opened up vast opportunities. It also affected me personally, socially, psychologically, emotionally."

"What started out as a welcome job to a hungry actor has become a constant and ongoing influence in my thinking and lifestyle."