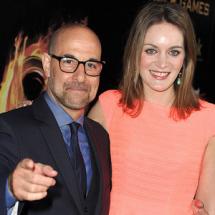 In a short meeting with the New York Daily News, Stanley Tucci confirmed that he has quietly married Emily Blunt's sister, Felicity.

The news comes as Felicity was spotted wearing a wedding ring during the screening of Hope Springs, starring Meryl Streep, in New York, last Monday. The couple had been engaged since last November.

The couple was set up by Emily Blunt, who co-starred with Tucci in 'The Devil Wears Prada', in 2006.

"Emily loved Stanley on the set of Devil, and just thought they would hit it off, so she set them up," a friend tells Us Weekly. "Felicity is a lovely person and very warm and comforting."

Tucci says that the couple are planning a more formal wedding shortly with close friends and family.

The 51-year-old recently starred as the flamboyant Caeser Flickerman in 'The Hunger Games'. This is Tucci's second marriage after his first wife, Kate, died tragically from breast cancer in 2009. He has three children from his first marriage.