St. Louis Man Ticketed For Honking At Cop Like 'Curb Your Enthusiasm' 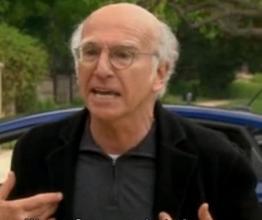 In a case of life imitating art, a St. Louis man was ticketed for honking at a cop.

Computer programmer Scott Smith says he was ticketed for honking at a police officer at a red light. Smith repeatedly honked after the light turned green and the car in front of him didn't move.

Except unlike Larry David in 'Curb Your Enthusiasm', the unmarked car in front him was being driven by a cop.

Smith used his cellphone to record the heated exchange with the plainclothes officer after he told him to pull offer.

"Is your horn stuck?," asked the officer.

"Is your brake stuck?," Smith replied.

Smith was told to expect a ticket in the mail for excessive noise from a vehicle. He plans to file a complaint.

You can watch the exchange below, be warned of some explicit language.