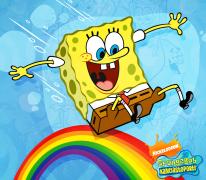 An upcoming episode of 'SpongeBob Squarepants' has sparked a political debate.

The episode, titled 'You're Fired', follows SpongeBob SquarePants as he's fired from his job at the Krusty Krab after his boss figures out he can save "a whole nickel" from his payroll.

SpongeBob finds himself begging on streets but friend Patrick shows him the "glorious unemployment" can mean lots of spare time and free meals.

"Being unemployed is the best gig I know," Patrick tells SpongeBob.

But at an all you can eat and totally free meal, SpongeBob says: "Unemployment may be fun for you, but I need to get a job."

With its notes of labor issues, low wages and the social safety net, the episode has sparked a debate from both sides of the political spectrum.

Here's a sneak peek at the November 11 episode:

Jimmy Kimmel joked that the follow-up to the episode will find Spongebob Squarepants on the ObamaCare website: