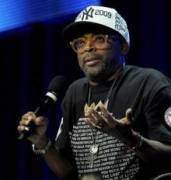 Spike Lee and Jada Pinkett Smith have announced they will not be attending the 2016 Oscars over the lack of diversity in this year's nominations.

"How is it possible for the 2nd consecutive year all 20 contenders under the actor category are white? And let's not even get into the other branches," asks Lee in a post on social media.

"Forty white actors in 2 years and no flava at all. We can't act?! WTF!! It's no coincidence I'm writing this as we celebrate the 30th anniversary of Dr. Martin Luther King Jr's birthday. Dr. King said 'There comes a time when one must take a position that is neither safe, nor politic, nor popular but he must take it because conscience tells him it's right.'"

"For too many years when the oscars nominations are revealed, my office phone rings off the hook with the media asking me my opinion about the lack of African-Americans and this year was no different. For once, (maybe) I would like the media to ask all the white nominees and studio heads how they feel about another all white ballot."

"The academy awards is not where the 'real' battle is. it's in the executive office of the Hollywood studios and TV and cable networks. This is where the gate keepers decide what gets made and what gets jettisoned to "turnaround" or scrap heap. This is what's important."

In her own statement, Will Smith's wife Jada Pinkett Smith asks: "At the Oscars people of color are always welcomed to give out awards... even entertain. But we are rarely recognized for our artistic accomplishments. Should people of color refrain from participating all together?"

"People can only treat us in the way in which we allow. With much respect in the midst of deep disappointment."

"Maybe it is time to pull back our resources, and we put them back into our communities. Into our programs. And we make programs for ourselves that acknowledges us in ways that we see fit."

"That are just as good as what the so-called 'mainstream' wants," she continues. "Begging for acknowledgment or even asking diminishes dignity and diminishes power. And we are a dignified people, and we are powerful. So let the Academy do them in all grace and love. And let's do us differently."