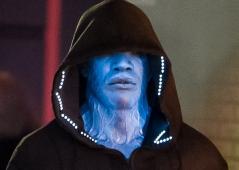 Sony Picture has given its rumored 'Sinister Six' -- featuring an all-star lineup of Spider-Man villains -- a November 2016 release date.

The studio has also announced that due to the villain team-up, the 'The Amazing Spider-Man 3' will be pushed back two years to 2018.

"With Sinister Six in the hands of writer-director Drew Goddard, we feel extremely confident placing the film on a prime date in 2016," says president of Sony Pictures Entertainment Motion Picture Group, Doug Belgrad.

Goddard, who served as an co-executive producer and writer on 'Lost', also wrote 'Cloverfield', 'World War Z' and 'The Cabin in the Woods'.

While it's not clear who the six characters will be, it would appear safe to assume that Jamie Foxx would return as Electro, Paul Giamatti as Rhino and Dane DeHaan as Green Goblin.

'The Amazing Spider-Man 2' earned $706 million worldwide, only $200 million of which was at the domestic box office.

That was considered disappointing by Sony since the reboot took in $760 million.