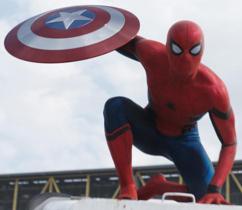 With the debut of its first trailer less than a day away, 'Spider-Man: Homecoming' is teasing fans with a new improved suit.

The short clip starts out with Jon Favreau back as Tony Stark's bodyguard and driver, Happy, asking Spider-Man about a "case."

Parker finds a letter from Stark that reads, "A minor upgrade."

"This is the coolest thing I've ever seen!" Parker says as he tries out the suit with web gliders under his arms.