'Spider-Man' Cuts Down Julie Taymor, Blames Her For Troubles In Countersuit 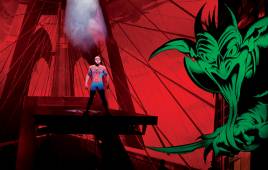 Producers of Broadway's 'Spider-Man: Turn off the Dark' have filed a countersuit against the show's ousted director, Julie Taymor.

Taymor, who was fired from the troubled production last year, had filed a lawsuit against producers last year, claiming that her termination violated her creative rights and that she still hadn't been paid royalties for her work on the musical.

But in their own filing this week 8 Legged Productions, the company behind the musical, alleges that Taymor "could not and would not do what she was contracted to do, thereby causing significant unnecessary expense, delay and other harm."

They say Taymor refused to develop a musical that followed the classic Spider-Man story and instead wanted to create a "dark, disjointed and hallucinogenic musical involving suicide, death, and sex."

According to the suit, after Taymor refused to cooperate the "delays and the increased expenses due to her actions" forced them to hire a new writer and director "in order for the show to survive."

"The show is a success despite Taymor, not because of her," it states.

Producers are seeking unspecified damages for breaches of contract as well as an injunction ordering her to cancel her copyright, which they claim was obtained by misrepresenting the extent of her work in the production.