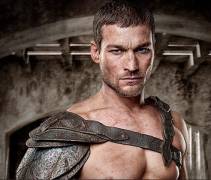 Andy Whitfield, who starred in 'Spartacus: Blood and Sand', died of non-Hodgkin Lymphoma on Sunday. He was 39.

Whitfield was preparing for the second season of Starz's series when he was diagnosed and had to drop out of the drama.

The network decided to produce the six-part prequel, 'Spartacus: Gods of the Arena', while they were waiting for Whitfield's treatment and expected recovery.

He was declared cancer free in May 2010 but by September his cancer had returned and, with a heavy hart, the show decided to move forward without him.

"On a beautiful sunny Sydney spring morning, surrounded by his family, in the arms of his loving wife, our beautiful young warrior Andy Whitfield lost his 18 month battle with lymphoma cancer," Whitfield's wife Vashti says in a statement.

"He passed peacefully surrounded by love. Thank you to all his fans whose love and support have help carry him to this point. He will be remembered as the inspiring, courageous and gentle man, father and husband he was."

The British born actor, who moved to Australia in 1999, was a virtual unknown when he was cast as the Thracian slave in 'Spartacus'.

"We are deeply saddened by the loss of our dear friend and colleague," Starz president and CEO Chris Albrecht adds. "We were fortunate to have worked with Andy in Spartacus and came to know that the man who played a champion on-screen was also a champion in his own life."

"Andy was an inspiration to all of us as he faced this very personal battle with courage, strength and grace. Our thoughts and prayers are with his family during this difficult time. He will live on in the hearts of his family, friends and fans."